Rock style has been loved for years by both men and women. It never goes out of fashion and is visible on the streets every season. Because rock style is not only music, but also characteristic clothes and accessories.

Where did the rock style come from?

It all started in the 60s of the 20th century when musicians of that time started to protest against the existing world order. They did it through music, lyrics and stage image. Fans, fascinated by their idols, started to imitate their looks and this is how leather jackets, studs, bandanas and black color from head to toe entered the mainstream. Today, dressing in rock style is not necessarily associated with being a fan of rock music, but it has become part of the pop culture around us. It is characterized by a laid-back style of being, casual and liberated

Probably the most characteristic and recognizable element of the rock style. It is best if it is black and decorated with studs. Wearing it will give a rock edge to even the most inconspicuous and polite outfit. Made of good material, it will serve you for many years, and even if it is worn in some places, it will give it more character and make it have its own history.

Narrow, body-hugging pants are another piece of clothing characteristic of rock style. They are most often made of waxed material, which is meant to imitate leather, although denim also reigns in many styles. If you choose pants with holes, you will fit even more into the canon of rock fashion. On warmer days, you can replace long pants with short, raggedy shorts

T-shirts with big, colorful prints are great to wear under a leather jacket. The print has to be colourful and large. Ideally, it should feature a rock band, instrument, skulls or flowers. Rock T-shirts are usually oversized, thin and have a rather large, loose neckline

The most commonly associated with rock style are the glans. These are heavy boots, with a massive, often tractor-like sole. However, this is not the only option. Having fun with rock style, you can also wear other high boots – preferably with large buckles or studs, which will give your look a real fierce character. Black ankle-length sneakers will also go well with lighter outfits

A nice change for a leather jacket. Such a vest can be made of leather or denim – in black, of course. Often seen as the main outfit element for rock band performers. You can put a T-shirt or shirt under it, but real rock souls wear it on their naked body.

Next to leather jackets, this is probably the most characteristic element of rock styling. Studs are everywhere – on tops, dresses, pants, shoes, bags, belts, jewelry and even hair accessories. The more the better, but you have to remember not to overdo it

Jewelry with a capital “B”!

Rock jewelry must be visible. That is why it should be large in size, to be noticeable from a distance. It should be kept in a dark style, so all the skulls, pentagrams and studs are most welcome. Devotees of rock style usually reach for massive necklaces, chains and chokers. On the other hand, large rings and thick leather bracelets decorated with studs are often found on the hands

Thick black eyeliner is the basis of rock chick make-up. Blood red lips with matte lipstick are a perfect contrast. Contour your face and emphasize your features with a bronzer to give your face a slim look. Don’t forget about the right manicure – black nail polish is a must. This is an essential element of every rock styling

See also a pinch of inspiration straight from Pinterest: 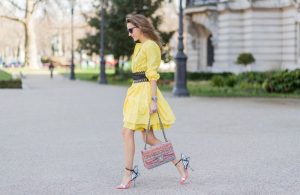